The ForMOVe research project will compare and contrast forms of forced migration in its interrelation with organized violence by analyzing biographies and trajectories. Therefore, we formulated one main guiding question and three sub questions as well as operational definitions for the concept of forced migration and for the concept of organized violence.

How are experiences and perceptions of forced migration and organized violence represented and reconstructed in actors’ migration trajectories (as sequences of persons through social positions) and biographies (as subjective reconstructions of one’s life-course)?

Forced migration can be the result of a diversity of factors: political or economic insecurity, environmental causes, forced displacement due to development projects, as victims of trafficking, exploitation and other forms of violent organizations (such as gangs and cartels). It may be carried out individually or as a collective action (families, socio-cultural-ethnic groups). It must be understood within the scope of globalization and structural inequalities (North-South) and its theorization should be linked to a deepening factor of underdevelopment.

Although all migration to a certain extent is mixed migration – our project focuses on forced and involuntary migration in its interrelation with organized violence. 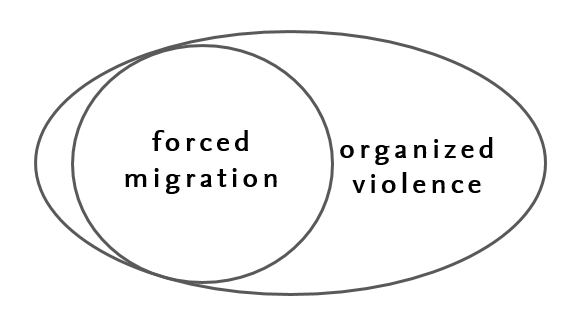 Organized violence refers to the use of physical perpetrated force in a  collective, continuing and organized way, in order to achieve collective and/or corporate (organized) goals. In this way, it differs from collective violence because of its durability while also contrasting with organized crime insofar as it appears in both legal and illegal forms.